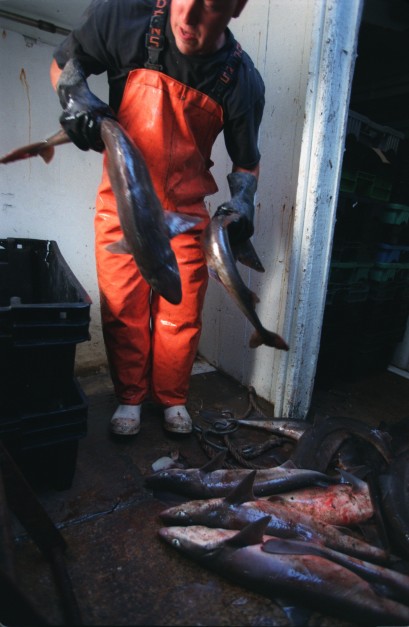 Starting this week Whole Foods Market, the grocery chain, will no longer sell seafood rated red by the Monterey Bay Aquarium’s Seafood Watch and the Blue Ocean Institute. The standards take into account not only how many of each species of fish there are in the sea, but also how quickly they reproduce and how damaging the methods of catching them are to their marine habitats and to other species. The chain originally announced that they would no longer carry “red-rated” wild seafood in 2013, but pushed up the start of the moratorium to coincide with this year’s Earth Day. On Sunday the grocer announced in a blog on its website that “From now on, all of the wild-caught seafood we carry will be from fisheries certified sustainable by the Marine Stewardship Council (MSC) or green (best choice) or yellow (good alternative) species rated by Blue Ocean Institute (BOI) and Monterey Bay Aquarium (MBA).”

That means that Atlantic cod sold by the grocer will have to be caught using hooks or gill nets, not trawlers that drag nets over the bottom of the ocean. Sturgeon, Atlantic halibut, octopus, turbot, tautog, imported wild shrimp, swordfish caught by certain methods, and many species of tuna and rockfish will be no longer appear on the Whole Foods fish counters. The grocery store has already stopped selling certain critically overfished species such as bluefin tuna, orange roughy, shark, and, for the most part, marlin. Even canned tuna sold at Whole Foods will have to be caught with a pole or a line.

While environmentalists embrace Whole Foods’ embargo of overfished species and fish caught by environmentally damaging methods, fisherman, particularly those in New England, where I covered the collapse of fisheries in the 1990s, are outraged. The description of fishermen grousing and complaining also angers anglers, but it’s well-earned, and often justified. The New England Fisheries Management Council makes the regulations fishermen have to navigate as turbulent as the seas they work on. Consumers and retailers pushing sustainability with their purchases make those fishermen’s jobs that much more difficult. It’s not unlikely that Whole Foods’ move will push a few of them out of business, like New England Fisheries Management Council regulation drove a fisherman named Russ Bowles, who I spent time with in the 90s, from the business.

In the New York Times story on Whole Foods’ ban on selling certain seafood, and New England fishermen’s reaction to it, one Gloucester fisherman commented, “they’re just doing it to make all the green people happy.” I heard similar complaints virtually every time I wrote about or photographed the dwindling New England fish stocks and efforts to restore it.

The complaint of the fisherman is not only true, it’s the way market-based environmentalism is suppose to work. And you don’t need Whole Foods to interpret the ratings for you – on my smartphone I use the Monterey Bay Aquariums Seafood Watch App and another just called Seafood that make purchasing sustainably harvested seafood as easy as reading a grocery list.

Unfortunately, the ratings that Whole Foods is basing its actions on don’t always work. Last week the journal Marine Policy published a study showing that, for fish stocks where enough data is available, nearly a third of those certified as sustainable by the MSC were actually overfished. Juliet Eilperin, an environment writer for the Washington Post and the author of Demon Fish: Travels Through the Hidden World of Sharks, reported Saturday on the credibility of sustainability standards in fisheries and the move of some fisheries to less-stringent certifiers. Last Thursday, Eilperin points out, the MSC certified the long-line swordfishery in eastern Canada that kills hundreds of endangered sea turtles and 35,000 sharks every year. As the MSC has approved more species as sustainable to catch and sell, environmentalists concerned about those fish are backing away from the organization’s certifications.

Whole Foods ban on red-rated species swims in the right direction, and fishermen are likely to have a lot more to complain about when scientists and activists push the other 30 percent of commercially harvested fish species that are currently overfished onto the MSC list, and Whole Foods moratorium, or those stocks start to run out.

In the meantime, those of us who vote with our dollars for conservation should see Whole Foods’ move as a success, but also recognize that it’s just a drop in our terribly troubled oceans.