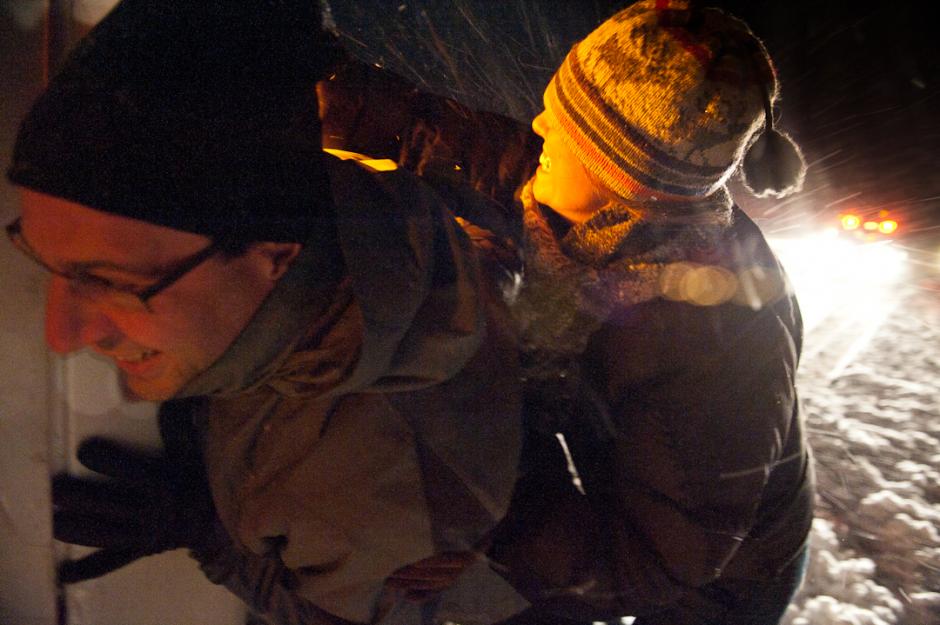 The side of our bus is painted with a command to “Follow the Sun,” and we tried to heed its instructions. Really, we did. But at midnight, when a dozen of us were pushing the bus through a blizzard up highway 550 in northern New Mexico, it didn’t seem like we’d done very well sticking to the plan. As we attempted to “man haul,” (and woman haul) our 55-seat bus up the snow slicked highway, I thought of the coming 100-year-anniversary of Robert Falcon Scott’s doomed expedition to the South Pole, Raold Amunsdsen’s successful round trip to the pole, and of the tourists who are making their own trips to the bottom of the planet to commemorate the centennial. Despite repeated trips off the bus to chain up, push the vehicle, or throw snowballs, none of the travelers on our expedition ever feared losing their lives during our ordeal, just a few hours of sleep.

The Institutes for Journalism & Natural Resources has brought together 14 journalists for its Energy Country Institute led by Frank and Maggie Allen. We’re traveling through southern Colorado and northern New Mexico in a bus driven by Dick Sandlin, who’s vast knowledge of the turf helps fill in the knowledge gaps of the energy wonks and regional journalists who make up our crew. When he’s not busing tour groups through the fickle weather of the southern Rocky Mountains, he leads tours of Spaceport America, but despite his interest in the stars, most of the fellows have come to see as our own polar explorer – something of an Ernest Shackleton of the Greyhound class.

Fellows in the Energy Country Institute are spending eight days visiting sites in New Mexico and southern Colorado to learn how the region will keep the lights on in the coming century. On Sunday we drove from Santa Fe to Colorado’s San Luis Valley, a magical and fragile plain sandwiched between the Sangre de Cristo and San Juan mountains. The valley is one of Colorado’s most important and tradition-bound agricultural areas, but a diminishing and over-allocated water supply, and an abundant solar resource, are bringing change

We first visited the Ranch of George Whitten and Julie Sullivan, who run a small cattle ranch in Sawatch County.George’s family has been ranching in the valley since the late 1800s. Julie was an environmental activist who brought a group of students to visit George’s ranch and ended up falling in love with the rancher. Each of them bears the title of “environmentalist” a little differently. George’s philosophy is rooted in the land ethic – he raises grass-fed cattle for meat. Julie arrived at the ranch with more progressive ideals, and was a vegetarian, but eats meat now, so long as she “knows the animal’s face.” So, while they share the same goals and ideals, they don’t always agree the methods and approaches to keep a sustainable ranch running. It’s provided an interesting system of checks and balances in an increasingly challenging agricultural environment.

Others have been sited on grazing land or on fragile wetlands. We left the valley with an understanding that energy, water, tradition and progress are all part of an increasingly precarious balancing act in the San Luis Valley.  After lunching and touring George and Julie’s ranch, we were treated to a reception by county and town officials in Alamosa.

The following morning we rejoined them along with representatives from Sun Power, a company that recently brought a 17-megawatt plant online, and Iberdrola, the Spanish solar power company that this week will begin testing a 30-megawatt solar facility it just completed installing in the valley. We heard from representatives from the solar-power companies, officials involved in the plan to conserve the valley’s water by taking 40,000 acres of agricultural land out of production, the Chairman of the Alamosa County Commissioners, and representatives of environmental organizations concerned with both the water and energy issues affecting the valley. While virtually everyone we’ve met is excited by the development of solar power in the valley, in an environment where water and energy are tightly linked, utility scale solar projects are also causes for concern. Some types of solar projects, particularly those that involve turning a steam turbine, use a lot of water.

From the San Luis Valley, we planned to head to the Southern Ute Reservation via Wolf Creek Pass, but by the time we left Alamosa, an early-season snowstorm had made that route unsafe. Plan B was to take Route 17 over Cumbres Pass, but the bus lost traction in the heavy snow on the pass, even after stopping to put chains on, leaving us stranded. Two Colorado Department of Transportation snowplows cleared the road so we could turn around, then escorted us back down the pass. We finally took a route back into New Mexico and up Route 550, but even in the foothills of the Four Corners, the bus got mired in the snow, so the fellows piled out of the bus to push it though the steepest section. For at least one of the fellows, freelance writer Lindsey Hoshaw, the announcement of the detours were a shock – she was hoping to get to a hotel room desk to continue working on a story for the Boston Globe.

She’s adapted well to writing on the bus. And, although a trip that was planned at 2 1/2 hours ended up taking more than 12, at least nobody had to eat any dogs on our way to the Southern Ute Reservation in Ignacio.