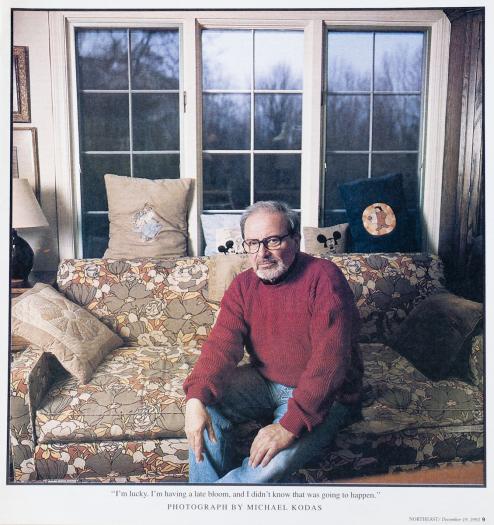 “What’s it take for a celebrity to make a successful book?” Stephen Colbert asked Maurice Sendak during his two-part interview this week with the author of Where the Wild Things Are and other beloved children’s books. “What do I have to do?”

“Well, you’ve started already by being an idiot,” Sendak responded.

Sendak’s advice for aspiring writers was hilarious, and spot on, during his appearance on The Colbert Report, and it was for me as well during an afternoon that I spent at his house nearly 20 years ago. I was shooting photographs of the children’s author for a collection of portraits of Connecticut writers I was making for Northeast magazine. I didn’t get to draw or sniff markers with him like Colbert did (make sure and watch to the end of the second part of the interview), but he definitely inspired my creativity. As during his appearance on The Colbert Report, Sendak was both brusque and warm, charming and bombastic. He worked hard to seem curmudgeonly, and that made him incredibly fun to photograph. As I was leaving, he put a leash on his dog and headed out for a walk before dark. Somewhere, I have one last photograph I made of him, standing with his dog in the woods with a crimson sunset behind him. That photograph didn’t fit with the project, so the clip I dug out today has another of the portraits I made. But the photograph that remains in my mind’s eye is the one of him with his dog in the woods filled with alpenglow. Someday I’ll have to dig that one out too.