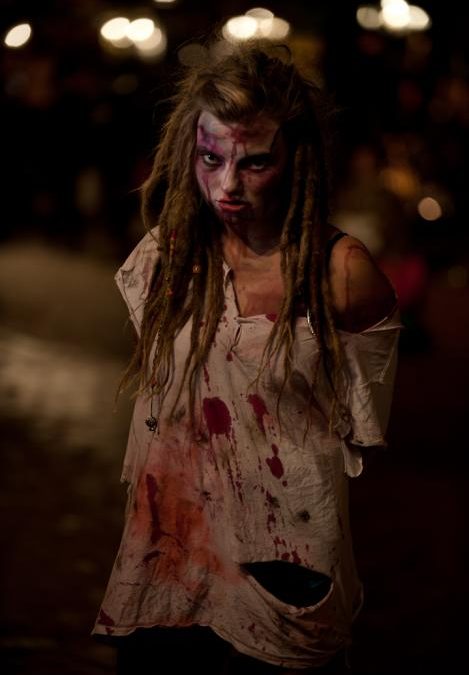 So what’s brought all these walking dead to Colorado?

Last night in Durango, CO, zombies behaved like, well, zombies. The unsanctioned walk of the dead (good zombies always apply for the proper permits) drew 1,500 undead who got into an altercation with police. No officials’ brains were eaten, but they were pelted with rocks and bottles. Denver’s 6th Annual Zombie Crawl last week drew a world-record crowd, attracting between 14,000 and 16,000 brain-hungry participants.

Perhaps, like Denver’s bike-sharing program, which last year’s Republican gubenatorial candidate Dan Maes criticized as an effort to make Colorado’s capitol city into a “United Nation’s community,” the increase in undead in Colorado is a U.N. plot – specifically a result of someone at the United Nations Population Fund’s head for marketing. The organization estimates that October 31st – Halloween – was the day when the global population reached seven billion. There’s no way they can know for sure what day the world will first hold seven billion living people – the hundreds of thousands of births and deaths each day present far too much variability to precisely calculate the world’s population to the day, so the selection of Halloween by the UN was as much a symbol as anything. Other organizations, including the U.S. Census Bureau predict world population will reach the seven billion mark in about four months, around the time of another appropriate holiday for the milestone – April Fools Day. But by picking Halloween as the day that we reached the 7Bn number, the U.N. is making statement, intentional or not, that the growing horde is something to fear.

The report shows the world was first inhabited by one billion humans in 1804. From that date, it took 123 years to reach two billion. By contrast, global population hit six billion in 1999, just 12 years ago, and passed the five billion mark 12 years before that, in 1987. According to the Population Reference Bureau, in 2010 there were, on average, 384,146 births every day, and 155,885 deaths daily, leading to the addition of about 159 people to planet Earth every minute. Models predict another two billion people living on the planet by 2050.

The rapidly increasing population brings a lot of worries, if not outright terrors. Paul Ehrlich, author of  the 1968 bestseller “The Population Bomb,” President of the Center for Conservation Biology and Bing Professor of Population Studies at Stanford University, was one of seven luminaries who commented on the challenges presented by the 7Bn in an article by James Eng at MSNBC.

“Seven billion is already facing us with horrendous problems, including almost 1 billion people hungry and contributing greatly to the chances of catastrophic climate disruption.  But the next 2 billion people the demographers expect by 2050 will cause much more environmental damage than did the last 2 billion added to our population — a classic nonlinearity.  That is because human beings are smart, and picked the low-hanging fruit first. Thus each added individual, on average, must now be fed from more marginal land, supplied with water from more distant or more polluted sources, obtain the metals required to make the products he or she consumes from poorer ores, etc.”

Perhaps that explains some our current obsession with zombies, which have supplanted vampires as the trendiest Halloween costumes and television horror shows. Every imaginary monster plays on a real-world fear. The Alien in James Cameron’s movies with Sigourney Weaver played on our fear of cancer –  something growing, hidden inside us that would eventually kill us in a most gruesome way. Francis Ford Coppola’s Dracula came at the height of the AIDS epidemic and manipulated the angst that our passions could lead to an infection in our blood that would rot not only our bodies, but our values. Godzilla was spawned by our tinkering with nukes. Most of the creatures and phantoms that inhabit our popular culture – vampires, werewolves, Godzilla, the Halloween films’ Michael Myers and Friday the 13th’s Jason are unique individuals or part of small minorites, often hidden from the majority they terrorize.

But zombies are different. Zombies are the majority, threatening to devour us or turn us into one of them. They are terribly obvious, making no effort to hide. You can see them coming from a mile away and with their complete lack of cunning, they are exceedingly easy to kill. But it doesn’t matter. There are so many of them, you can’t possible stop them all. Eventually one or a hundred of them are gnawing on you. Our terror of the undead is based in our fear of hordes. In fact, the zombie has changed to match our fears. Originally, zombies were a few cadavers brought back to life by a voodoo master to serve his evil plans. It wasn’t until George Romero’s night of the living dead that zombies were presented as hordes of corpses serving only their own mindless need to eat flesh or brains.

Since then “zombie” has become one of the most popular slurs of political parties, social movements, or classes of workers. You can kill Tea Party Zombies in an online game. Occupy Wall Street protesters dressed as “corporate zombies,” in Zuccotti Park a few weeks before Halloween. The Occupy protesters themselves haven’t been immune to necrotic namecalling. We’ve got conservative zombies, liberal zombies, communist, socialist, and libertarian zombies. In the coming Presidential election, virtually every Republican candidate has been marked as the walking dead, while President Obama has literally hundreds of images depicting him as a flesh eating monster. A few years ago Paul Waldman argued in the American Prospect that, while the zombie narrative might initially appeal to the libertarian streak in American politics due to its requirement of lots of firearms to defeat the throngs of flesh eating undead, in the end, it’s a liberal storyline – when society breaks down, survival requires “the progressive ideals of common cause and collective action.”

The science fiction wesite io9, which is produced by the real science program NOVA, has a chart showing that the number of zombie films released – the site’s definition is rather broad, including both the Frankenstein monster and the mummy – increase markedly in times of war and social upheaval.

The population boom is certain to bring social upheaval and war – with seven billion people and counting competing for food, water, energy and every other resource on the planet. That competition is made easier when we can categorize a few billion of our competitors as sub-human – the undead.

As for Colorado’s zombies, the ones I encountered on the Pearl Street Mall in Boulder were friendly and funny. I was happy to be out and among them, and many of the other spectacular costumes, on Halloween night.